What Does It Mean When a Bird Stands on One Leg? 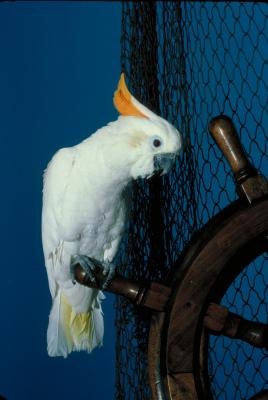 Birds and human beings don't exactly have too much in common at the end of the day, and standing styles are no exception to this rule. Within the broad, diverse and vast avian world, standing on just one leg is a relatively common behavior. Not only is the position relaxing to many birds, it can also serve some practical purposes.

If a bird is feeling happy and at ease with the world, he may display it by standing on one leg. You may observe this in a bird before he goes to sleep, whether at night or for a short nap. Look out for other signs of a comfy and satisfied parrot, such as beak grinding. If a bird is standing on one leg, he may hide one limb -- the elevated one -- in his feathers.

Sleeping and How it Works

Some birds even catch up on their beauty rest while standing on one leg, strangely enough. If your birdie keeps one of his legs on a perch while he conceals the other one within his feathers during sleeping, he is essentially using a locking function to stay securely in place. When birds rest, their body weight applies pressure onto their heels, which in turn clasps their toes together and ultimately leads to a sturdy and tight hold. If your pet parrot looks serene as can be while sleeping in this stance, don't worry. He's got it covered.

If a bird is standing on one leg, whether he's sleeping or lounging around, the answer is often pretty simple -- to give the raised leg a much-needed break from constant standing. Birds get tired sometimes, too.

Although standing on one leg is commonplace in the world of pet birds, such as parrots, it also occurs in their wild avian counterparts too. If you ever visit a zoo and notice a flamingo wading in the water with one leg up in the air, his stance is just as reliably secure as that of your pet bird.