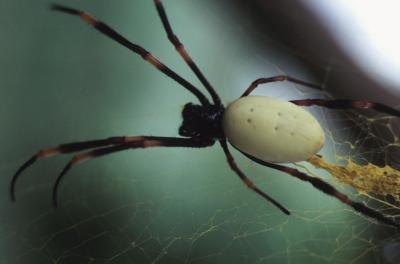 On the small side at a maximum of 8 inches long, the helmeted honeyeater became the bird emblem -- or official bird -- of Victoria, a province in southern Australia, in 1971. It is considered an "endemic species," meaning that the helmeted honeyeater is found nowhere else in the world but portions of Australia. In 1989, it was discovered that only 50 birds remained out of 170 species. With conservation efforts, 150 were counted in the wild and captivity; however, it is still critically endangered.

Colors can vary on the bird, as different species mated and combined genes. Males and females do not look much different and can be difficult to tell apart. The bird's upper body is a greenish-gray, with greenish-yellow on the feathers of the tail and wing. The undersides are yellowish-green, interspersed with darker streaks of color. The top of the head is golden yellow, as is the forehead, and it appears to have a "helmet" -- giving the bird its name. Glossy black feathers appear on either side of the head, and the throat is also yellow.

The bird is rather picky, needing a combination of plants for proper shelter. Tea-trees, swamp gums, manna and bushes near water circled by tall grass are where they can usually be found. As people drain swamps and remove the plants around the swamps to make more room for houses, buildings and roads, the birds' habitat disappears, giving it fewer places to nest and find food.

With a curved beak, the bird is able to dip its beak into flowers and drink nectar, which also contributed to its name. However, it also prefers to eat spiders and other insects, such as mealworms, berries, manna and honeydew -- a sticky substance given off by certain insects, such as aphids.

How To Help Keep It From Extinction

If you live in or visit Victoria, you can volunteer your time to help protect the habitats by planting shrubs, grasses and trees that are desperately needed by the bird for food and shelter. In 2011, Friends of the Helmeted Honeyeater have worked with volunteers -- including schools -- to plant more than 13,000 such plants in Yellingbo Nature Conservation Reserve. This creates new areas of living space for the bird to nest in, so that more baby birds can be born in hopes of saving it from extinction. If you cannot help by planting, donate money to organizations that are working to save the honeyeater and make new habitat space, such as the Zoos Victoria or Friends of the Helmeted Honeyeater. This group also sells merchandise -- such as shirts -- with 100 percent of the funds going to repair new habitat areas. You can also tell others about the birds' predicament and encourage them to donate or volunteer their time.